skip to main | skip to sidebar

Hello again! I've just completed a transatlantic move from southern Italy to the D.C. area and now have access to the internet with a computer battery that works . . . what a long few months it has been! I actually read through Bischoff's palaeography text (usually used as a reference) while holed up in a hotel waiting for phone calls about jobs/internships.

Still waiting on news from the job front, so if anyone in the D.C. area needs a master's level assistant in medieval studies with a certificate in library science, do please let me know. Will work for Latin tutelage!

Also, thanks to those who left comments in my absence! I'll be working on incorporating your information here in the coming weeks.
Posted by r. mentzer at 5:21 PM No comments:

Labels: about this site, palaeography

Evellum's 'The Making of a Medieval Manuscript'

The Making of a Medieval Manuscript is part of the Evellum Scriptorium Series by Bernard Muir and Nicholas Kennedy. I scanned in the DVD cover so you can read the summaries and blurbs provided. 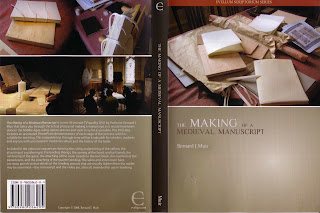 There is very little information about this series (aside from the advertisements) available to those of us who are in between universities at present and desperately searching for a fix so my access to reviews may seem limited. Because they are. Now I am even more depressed . . . but I digress. The Old English Newsletter has a bibliographical database by which I found that Muir turned out several articles on books of hours and the Exeter MS during the time he worked on that facsimile project. Also a joint project with Kennedy, the facsimile of Bod. Lib. MS Junius 11 was greeted with an review from the Digital Medievalist that include the phrases "outstanding functionality" and "important contribution". In addition to this, Bernard Muir and John Stinson (the bookbinder in the documentary) gave a lecture suspiciously titled The Making of a Medieval Manuscript at the State Lib. of Victoria for their exhibit The Medieval Imagination, which was then made into a podcast and is available--free of charge--here.

The DVD itself contains a +40 min. presentation recording the process of binding a book in medieval fashion. It is narrated with a voice over and there is some appropriate music in the background; good sound quality, clear visuals, and it isn't too much of a teaching tool that you have to stop the video every time they use a technical term. The other marvelous thing about it is the huge slide presentation with more pictures (not just screen shots) that give more detailed shots of the process. The only thing I have reservations about is that it isn't Bischoff's text read aloud: for the perfectionists and specialists, you may want to stop the video and explain more deeply about certain processes and variations involved in the production of a codex (e.g. the difference between insular and continental practices). I really don't have a problem opening my mouth, though, especially when there are visuals to point out and at which it is possible to wildly gesticiulate.

Has anyone used it in their classes? If so, please comment!

[Note on prices: I found it for £20 at the British Library bookshop but it is available from the website for £50. Neener neener.] 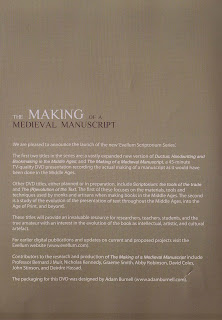 Greetings! Welcome to the first summary of the news coverage of medieval manuscripts. I hope that I can make this format more my own and not simply a copy of Dr. Nokes', but for now my imitation must be a shining compliment to the practical format adopted at UW. I've taken the liberty of adding an embedded video at the end of this entry; I've been wanting to find a way to include the interviews and interesting multimedia I find dealing with medieval MSS and this seems to fit in rather well.

Just a heads-up: So far, I haven't spoken of Evellum's products on this blog because I couldn't seem to find anything but advertisements online. Recently, I was at the the British Library and bought two of their interactive dvds. I hope to review them here soon.
Medieval Manuscripts of the Fitzwilliam Museum -- Part 1
"Dr Stella Panayotova, keeper of manuscripts and printed books Fitzwilliam Museum Cambridge, introduces the museum and shows a rare example of a Dutch medieval manuscript. http://www.slv.vic.gov.au/goto/medieval"
Posted by r. mentzer at 6:42 PM No comments:

Other Introductions to Medieval MSS on the Internet

Medieval Manuscript Manual
"This manual was created in the course of various cultural heritage-projects at the Department of Medieval Studies at Central European University, Budapest. It should offer basic information on the topic Medieval Manuscripts to be comprehended and utilized also by non-specialists in the field. It might be applied as general background knowledge, teaching module, and distance learning unit
Thus, it is also meant to diminish the often existing gap between technical specialisation and general cultural heritage knowledge. " This site is available in English, Hungarian and Italian, for download or online viewing.

The Free Library of Philadelphia's collection of medieval & renaissance manuscripts.
Not only does this site provide an introduction to manuscript studies and images of the manuscripts themselves; it also provides technical notes on the process of digitization, description and cataloguing.
Posted by r. mentzer at 6:08 PM No comments:

Greetings! After guest-blogging over at Dr Nokes' Unlocked Wordhoard, I have come to realise just how often medieval manuscripts are brought into the blogosphere and even into mainstream news services. To keep up with this, I am going to try out something like what we've been doing at Unlocked Wordhoard and post periodic updates of how medieval manuscripts are being presented in the news.

Foreseeable problems: double-posting on UW, getting down the rhythm of the news so that I can post regularly instead of sporadically. These things will be worked out in time, I'm sure.

I'm grateful for your patience while I try something new, and would welcome your feedback if you have time to give it.

Now going through the first phase of major content overhaul!

I am now going through the site methodically (though it may appear otherwise) in an attempt to edit and revise much of the content. Hopefully this will make the outline of the site more specific and more easily searched by visitors. Thanks for your patience with the random comments I leave myself to note where I will be adding things!

Labels: about this site

These are sites I wish I had time to place into categories that would be more generally studied but regret to exclude, and refuse to lose entirely. Some of these sites are simply more obscure and place online manuscripts that are out of range of the mainstream preference for study, and some of them are too innovative to categorise in a general study.

Nevertheless, I place them before you. Hopefully this will be updated when more digitalisation projects make their way online, and technology advances to further allow us access to medieval manuscripts.
Posted by r. mentzer at 1:01 AM No comments:

On Anglo-Saxon Aloud, you can hear Old English spoken from the manuscript (or probably a transcription) and placed online. The goal of this project is to hear Anglo-Saxon literature in a manner similar to that in which it was originally heard, which is why you can hear that Dr. Drout is somewhat self-conscious when he sings the Psalms . . . who wouldn’t be? Often-anthologised pieces like Caedmon’s Hymn, Beowulf, and the Battle of Maldon are presented alongside more obscure pieces, like a number of charms, hymns, riddles, and sermons, which make the project all the more interesting.
Posted by r. mentzer at 12:56 AM No comments:

The British Library Caxtons Online provides an early printed edition of Chaucer’s Canterbury Tales, with commentary and transcription. The image resolution and quality of scholarship is excellent.

The De Montfort University at Leicester has hosted and produced this manuscript digitalisation and is working on several others presently in co-operation with the British Library. If you are interested in the study of manuscript digitalisation, you might want to check out their podcast, which contains a discussion of the subject by scholars.
Posted by r. mentzer at 12:49 AM No comments:

“A compilation of medieval recipes from authentic sources adapted for the 21st century kitchen, along with diverse facts on food & feasting in the Middle Ages & Renaissance and other historical culinary items.”

Gode Cookery is run by James L. Matterer, a long-time enthusiast who has written a cookbook, runs a catering business called Gode Cookery, and taught a medieval cooking workshop at Penn State all recreating recipes found in medieval manuscripts. He uses transcriptions of medieval manuscripts and then translates them to a form usable in a modern kitchen.

Very knowledgeable of his sources, Matterer also must interpret the manuscripts he uses--our measurements, appliances, and supplies are all quite different from those available in a medieval kitchen!
Posted by r. mentzer at 12:28 AM No comments:

“The Joan of Arc Archive is an online collection of information, both general and scholarly, concerning Joan of Arc [Jehanne d’Arc or Darc in medieval French]; including biographies, trial excerpts and commentary, letters and other such documents. English translations and transcriptions of the original languages are provided.”

This site is put together by an historian, Allen Williamson, who is also the Founding Director of the Association for Joan of Arc Studies, which publishes a scholarly journal focused on Joan. Its purpose is to place his works online for the general viewer.

The medieval manuscripts in The Joan of Arc Archive are present in the transcriptions of her letters and from eyewitness accounts of her trial(s), which are accompanied by his translation and commentary.
Posted by r. mentzer at 12:16 AM No comments:

Obviously, the Latin language provided a huge background for medieval language, literature, and culture. It was the tie that bound so many cultures and countries together. It was the language of diplomats and that of intellectuals, who in turn controlled literacy and literature amongst the people.

References to history and older literature is often assumed natural in medieval literature, and those of us without a classical education feel bereft. In the next two posts I aim to give you basic resources that will allow you to find those references easily and learn more about the foundations of the medieval literature through the Latin language.
Posted by r. mentzer at 6:21 PM No comments:

This blog is the result of an independent study at the University of Maine at Augusta, but has become an ongoing project which is added to or edited on a semi-weekly basis. I'm not going to post when I make small updates to the information here, but please be assured things are improving constantly (add your feedback in the comments, if you have a moment, and it will roll along a bit faster!).

The goal of this project is to provide a general introduction to medieval manuscripts as they are presented online to various audiences from web-surfers to professional researchers.

Here are the welcome entry and the table of contents to get you started. Please reply to a post if you have questions or comments!